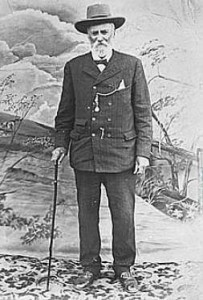 The first change of horses for Cobb and Co. coaches after leaving Brisbane took place at Tom Petrie’s Murrumba homestead but, by 1870, increasing demand led to the establishment of a separate hostelry, known as Petrie’s accommodation house, which offered a range of services to travellers. The coach stop soon became an important centre in the district with the beginnings of a township springing up around it. In 1872, Edwin Willett was granted a country publican’s licence to trade from the hostelry. The opening of the North Pine Post Office in the same building, also in 1872, gave the locality official township status. The North Pine River crossing near the township, originally a ford impassable after heavy rain or at high tide, was improved in 1877 with the opening of a low level bridge which directed all traffic through the area now known as Sweeney Reserve.

In later years, mounted troopers on gold escort from Gympie would change horses at the new Courthouse which was constructed in 1882. This building stood on Old Dayboro Road until 1962 when it was sold for removal. Following use by the Kallangur Baptist Church, the building was ultimately moved to the North Pine Country Park and restored. The North Pine Hotel, now a commanding feature of the North Pine Country Park, is a replica of the original building which was erected in 1887 to replace Petrie’s accommodation house. Although it was originally located on the north-eastern corner of the River Street and Old Dayboro Road intersection, in 1906, it was moved several hundred metres to the site of the present Petrie Hotel where it remained a prominent landmark until it was destroyed by fire in 1956.

By the early 1890s, the North Pine district had a population of 500 and the Post Office Directories for the period list the presence of a visiting police magistrate, six justices of the peace, a clerk of petty sessions, two police officers, a postmistress and savings bank officer, a stationmaster and telegraph operator, two teachers, five clergymen, two bakers, one blacksmith, one butcher, two carpenters, one hotelkeeper, several insurance agents, one painter and two storekeepers. The branch of the Queensland National Bank employed a manager and an accountant and office bearers were listed for the School of Arts and the Moreton Agricultural, Horticultural and Industrial Association.

In 1911, the Department of Railways changed the name of the North Pine Station to Petrie as a tribute to Tom Petrie who had died the year before. As postal operations were being conducted from the Station at this time, it also became necessary to change postal addresses. Many local residents opposed the name change and the issue generated a great deal of controversy for several years.